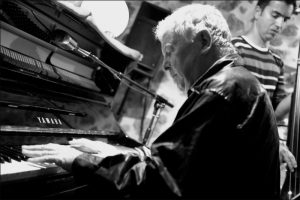 The name Africa Express has been coined by Jacques Ponzio, pianist and composer, when he decided to set his own band up in 1998. This was to pay his dues to the years (62-69) he spent in Ivory Coast as a youngster. If it’s true that the music of the beginnings was deeply rooted in West African influences (until 2003) that are still in motion now, it has ceaseless evolved thanks to the diverse band members who joined the projet and brought their own singularities, histories, even desires, and to the end, we can find in the music glimpses of Thelonious Monk, Mal Waldron, Erik Satie, John Coltrane and some others…

SSince the very beginning, Nicolas Aureille was, and still is, on drums, and so is Alain Venditti, sax tenor and soprano. In 2004 Patrick Gavard-Bondet joined on guitar. Later, in 2008, Jean-François Merlin took the double-bass chair. Since this time, the canonic formula of the Quintet was found and produced them music in such french festivals as Marseille 5 Continents (2003), Charlie Free (2004), Draguignan, 2013, along with greatly appreciated concerts un clubs or larger places in the Marseille area: Station Alexandre, Pelle-Mêle, Cave à Jazz, Rouge Belle-de-Mai, Paradox, Roll’studio, Maison du Chant… On that latest occasion, Naïma Gavard-Bondet went to sing with the group.